When All Else Fails...

… Execute the dictator. It’s that simple. When American troops are being killed by the dozen, when the country you are occupying is threatening to break up into smaller countries, when you have militias and death squads roaming the streets and you’ve put a group of Mullahs in power- execute the dictator.

Everyone expected this verdict from the very first day of the trial. There was a brief interlude when, with the first judge, it was thought that it might actually be a coherent trial where Iraqis could hear explanations and see what happened. That was soon over with the prosecution’s first false witness. Events that followed were so ridiculous; it’s difficult to believe them even now.

The sound would suddenly disappear when the defense or one of the defendants got up to speak. We would hear the witnesses but no one could see them- hidden behind a curtain, their voices were changed. People who were supposed to have been dead in the Dujail incident were found to be very alive.

Judge after judge was brought in because the ones in court were seen as too fair. They didn’t instantly condemn the defendants (even if only for the sake of the media). The piece de resistance was the final judge they brought in. His reputation vies only that of Chalabi- a well-known thief and murderer who ran away to Iran to escape not political condemnation, but his father’s wrath after he stole from the restaurant his father ran.

So we all knew the outcome upfront (Maliki was on television 24 hours before the verdict telling people not to ‘rejoice too much’). I think what surprises me right now is the utter stupidity of the current Iraqi government. The timing is ridiculous- immediately before the congressional elections? How very convenient for Bush. Iraq, today, is at its very worst since the invasion and the beginning occupation. April 2003 is looking like a honeymoon month today. Is it really the time to execute Saddam?

I’m more than a little worried. This is Bush’s final card. The elections came and went and a group of extremists and thieves were put into power (no, no- I meant in Baghdad, not Washington). The constitution which seems to have drowned in the river of Iraqi blood since its elections has been forgotten. It is only dug up when one of the Puppets wants to break apart the country. Reconstruction is an aspiration from another lifetime: I swear we no longer want buildings and bridges, security and an undivided Iraq are more than enough. Things must be deteriorating beyond imagination if Bush needs to use the ‘Execute the Dictator’ card.

Iraq has not been this bad in decades. The occupation is a failure. The various pro-American, pro-Iranian Iraqi governments are failures. The new Iraqi army is a deadly joke. Is it really time to turn Saddam into a martyr? Things are so bad that even pro-occupation Iraqis are going back on their initial ‘WE LOVE AMERICA’ frenzy. Laith Kubba (a.k.a. Mr. Catfish for his big mouth and constant look of stupidity) was recently on the BBC saying that this was just the beginning of justice, that people responsible for the taking of lives today should also be brought to justice. He seems to have forgotten he was one of the supporters of the war and occupation, and an important member of one of the murderous pro-American governments. But history shall not forget Mr. Kubba. 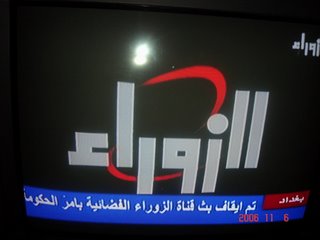 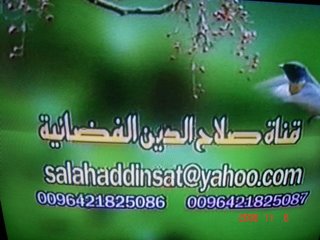 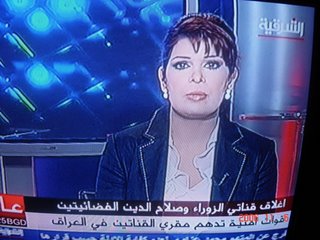 It’s not about the man- presidents come and go, governments come and go. It’s the frustration of feeling like the whole country and every single Iraqi inside and outside of Iraq is at the mercy of American politics. It is the rage of feeling like a mere chess piece to be moved back and forth at will. It is the aggravation of having a government so blind and uncaring about their peoples needs that they don’t even feel like it’s necessary to go through the motions or put up an act. And it's the deaths. The thousands of dead and dying, with Bush sitting there smirking and lying about progress and winning in a country where every single Iraqi outside of the Green Zone is losing.

Once again… The timing of all of this is impeccable- two days before congressional elections. And if you don’t see it, then I’m sorry, you’re stupid. Let’s see how many times Bush milks this as a ‘success’ in his coming speeches.

A final note. I just read somewhere that some of the families of dead American soldiers are visiting the Iraqi north to see ‘what their sons and daughters died for’. If that’s the goal of the visit, then, “Ladies and gentlemen- to your right is the Iraqi Ministry of Oil, to your left is the Dawry refinery… Each of you get this, a gift bag containing a 3 by 3 color poster of Al Sayid Muqtada Al Sadr (Long May He Live And Prosper), an Ayatollah Sistani t-shirt and a map of Iran, to scale, redrawn with the Islamic Republic of South Iraq. Also… Hey you! You- the female in the back- is that a lock of hair I see? Cover it up or stay home.”

And that is what they died for.