As expected, Al Maliki is claiming the rape allegations are all lies. Apparently, his people simply asked the officers if they raped Sabrine Al Janabi and they said no. I'm so glad that's been cleared up.

"Meanwhile, Prime Minister Nouri al-Makiki moved quickly to try to defuse a scandal after a Sunni woman said she was raped by three officers of the Shiite-dominated police.
The government's response — siding with the officers and trying to discredit the allegations — threatened to bring even more backlash.
A statement by al-Makiki's office accused "certain parties" — presumably Sunni politicians — of fabricating the claims in an attempt to undermine security forces during the ongoing Baghdad security operation, which began last week.
The statement was issued only hours after al-Maliki ordered an investigation into the case Monday night.
The 20-year-old married woman said she was assaulted after police commandos took her into custody Sunday in the western Baghdad neighborhood of Amil, accusing her of helping insurgents. She said she was taken to a police garrison and raped.
"It has been shown after medical examinations that the woman had not been subjected to any sexual attack whatsoever and that there are three outstanding arrest warrants against her issued by security agencies," the government statement said, without giving details.
"After the allegations have been proven to be false, the prime minister has ordered that the officers accused be rewarded," it said without elaborating."

I hate the media and I hate the Iraqi government for turning this atrocity into another Sunni-Shia debacle- like it matters whether Sabrine is Sunni or Shia or Arab or Kurd (the Al Janabi tribe is composed of both Sunnis and Shia). Maliki did not only turn the woman into a liar, he is rewarding the officers she accused. It's outrageous and maddening.

No Iraqi woman under the circumstances- under any circumstances- would publicly, falsely claim she was raped. There are just too many risks. There is the risk of being shunned socially. There is the risk of beginning an endless chain of retaliations and revenge killings between tribes. There is the shame of coming out publicly and talking about a subject so taboo, she and her husband are not only risking their reputations by telling this story, they are risking their lives.

No one would lie about something like this simply to undermine the Baghdad security operation. That can be done simply by calculating the dozens of dead this last week. Or by writing about the mass detentions of innocents, or how people are once again burying their valuables so that Iraqi and American troops don't steal them.

It was less than 14 hours between Sabrine's claims and Maliki's rewarding the people she accused. In 14 hours, Maliki not only established their innocence, but turned them into his own personal heroes. I wonder if Maliki would entrust the safety his own wife and daughter to these men.

This is meant to discourage other prisoners, especially women, from coming forward and making claims against Iraqi and American forces. Maliki is the stupidest man alive (well, after Bush of course…) if he believes his arrogance and callous handling of the situation will work to dismiss it from the minds of Iraqis. By doing what he is doing, he's making it more clear than ever that under his rule, under his government, vigilante justice is the only way to go. Why leave it to the security forces and police? Simply hire a militia or gang to get revenge. If he doesn't get some justice for her, her tribe will be forced to... And the Janabat (the Al Janabis) are a force to be reckoned with.
Maliki could at least pretend the rape of a young Iraqi woman is still an outrage in todays Iraq...

The Rape of Sabrine...

It takes a lot to get the energy and resolution to blog lately. I guess it’s mainly because just thinking about the state of Iraq leaves me drained and depressed. But I had to write tonight.

As I write this, Oprah is on Channel 4 (one of the MBC channels we get on Nilesat), showing Americans how to get out of debt. Her guest speaker is telling a studio full of American women who seem to have over-shopped that they could probably do with fewer designer products. As they talk about increasing incomes and fortunes, Sabrine Al-Janabi, a young Iraqi woman, is on Al Jazeera telling how Iraqi security forces abducted her from her home and raped her. You can only see her eyes, her voice is hoarse and it keeps breaking as she speaks. In the end she tells the reporter that she can’t talk about it anymore and she covers her eyes with shame.

She might just be the bravest Iraqi woman ever. Everyone knows American forces and Iraqi security forces are raping women (and men), but this is possibly the first woman who publicly comes out and tells about it using her actual name. Hearing her tell her story physically makes my heart ache. Some people will call her a liar. Others (including pro-war Iraqis) will call her a prostitute- shame on you in advance.

I wonder what excuse they used when they took her. It’s most likely she’s one of the thousands of people they round up under the general headline of ‘terrorist suspect’. She might have been one of those subtitles you read on CNN or BBC or Arabiya, “13 insurgents captured by Iraqi security forces.” The men who raped her are those same security forces Bush and Condi are so proud of- you know- the ones the Americans trained. It’s a chapter right out of the book that documents American occupation in Iraq: the chapter that will tell the story of 14-year-old Abeer who was raped, killed and burned with her little sister and parents.

They abducted her from her house in an area in southern Baghdad called Hai Al Amil. No- it wasn’t a gang. It was Iraqi peace keeping or security forces- the ones trained by Americans? You know them. She was brutally gang-raped and is now telling the story. Half her face is covered for security reasons or reasons of privacy. I translated what she said below. 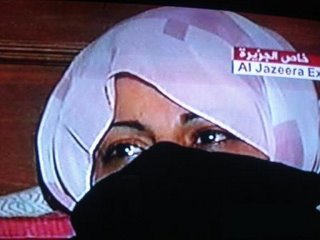 “I told him, ‘I don’t have anything [I did not do anything].’ He said, 'You don’t have anything?’ One of them threw me on the ground and my head hit the tiles. He did what he did- I mean he raped me. The second one came and raped me. The third one also raped me. [Pause- sobbing] I begged them and cried, and one of them covered my mouth. [Unclear, crying] Another one of them came and said, 'Are you finished? We also want our turn.' So they answered, ‘No, an American committee came.’ They took me to the judge.


Anchorwoman: Sabrine Al Janabi said that one of the security forces videotaped/photographed her and threatened to kill her if she told anyone about the rape. Another officer raped her after she saw the investigative judge. 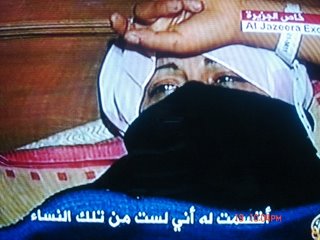 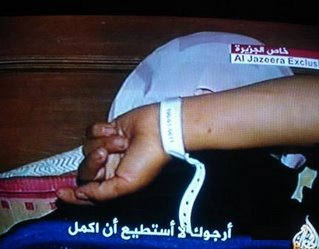 I look at this woman and I can’t feel anything but rage. What did we gain? I know that looking at her, foreigners will never be able to relate. They’ll feel pity and maybe some anger, but she’s one of us. She’s not a girl in jeans and a t-shirt so there will only be a vague sort of sympathy. Poor third-world countries- that is what their womenfolk tolerate. Just know that we never had to tolerate this before. There was a time when Iraqis were safe in the streets. That time is long gone. We consoled ourselves after the war with the fact that we at least had a modicum of safety in our homes. Homes are sacred, aren’t they? That is gone too.

She’s just one of tens, possibly hundreds, of Iraqi women who are violated in their own homes and in Iraqi prisons. She looks like cousins I have. She looks like friends. She looks like a neighbor I sometimes used to pause to gossip with in the street. Every Iraqi who looks at her will see a cousin, a friend, a sister, a mother, an aunt…

Humanitarian organizations are warning that three Iraqi women are to be executed next month. The women are Wassan Talib, Zainab Fadhil and Liqa Omar Muhammad. They are being accused of 'terrorism', i.e. having ties to the Iraqi resistance. It could mean they are relatives of people suspected of being in the resistance. Or it could mean they were simply in the wrong place at the wrong time. One of them gave birth in the prison. I wonder what kind of torture they've endured. Let no one say Iraqi women didn't get at least SOME equality under the American occupation- we are now equally as likely to get executed.

And yet, as the situation continues to deteriorate both for Iraqis inside and outside of Iraq, and for Americans inside Iraq, Americans in America are still debating on the state of the war and occupation- are they winning or losing? Is it better or worse.

Let me clear it up for any moron with lingering doubts: It’s worse. It’s over. You lost. You lost the day your tanks rolled into Baghdad to the cheers of your imported, American-trained monkeys. You lost every single family whose home your soldiers violated. You lost every sane, red-blooded Iraqi when the Abu Ghraib pictures came out and verified your atrocities behind prison walls as well as the ones we see in our streets. You lost when you brought murderers, looters, gangsters and militia heads to power and hailed them as Iraq’s first democratic government. You lost when a gruesome execution was dubbed your biggest accomplishment. You lost the respect and reputation you once had. You lost more than 3000 troops. That is what you lost America. I hope the oil, at least, made it worthwhile.